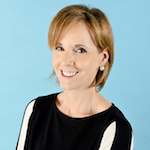 Maura Regan joins LIMA as Executive Vice President. (She previously served as Chairman of the LIMA Board of Directors from 2012-2014)

She joins from Sesame Workshop, where she was SVP & General Manager, International Media Business and where she has spent the last 17 years. Prior to that she had roles at Scholastic, Viacom and Jim Henson.