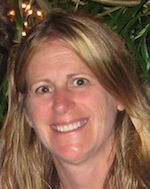 Previously Laurie was VP Licensing at A2 Entertainment. Prior to that she was Director of Global Licensing at Mega and SVP at 4Kids.