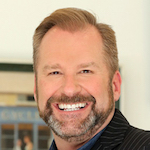 He joins from Dreamworks where he was Global Head of Consumer Products and Retail. Prior to that he was the CEO of Claire’s Stores and had he previously had an 11 year term at Disney where he was most recently the President of Disney Stores Worldwide.