Licensing remains as one the most exciting activities of the marketing mix. Many celebrities and brand owners are waking up to the idea that their brands have a value that can be exploited in areas outside their current existence.

In our opinion the most thorough Licensing market information is provided by Licensing International (formerly LIMA- the International Licensing Industry Merchandisers’ Association) and here is their May 2018 press release summary (www.licensing.org) :

Retail and other revenue generated globally by the trademark licensing business in 2017 rose 3.3 percent to $271.6B, according to results from the 4th Annual Global Licensing Industry Survey released by the International Licensing Industry Merchandisers’ Association (LIMA).

Royalties generated by those revenues in 2017 rose 2.6 percent from a year earlier to $14.5B. The slightly lower increase in royalty revenues is the by-product of a 1.2% decrease in the weighted average industry royalty rate from 8.2% to 8.1%.  Average retailer gross margins increase by 0.9% this past year, likely the result of the much stronger worldwide retail environment in 2017. 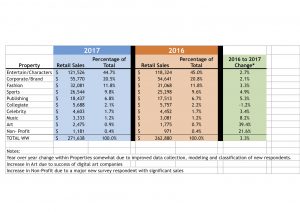 As in past years, the top licensing property type was Character & Entertainment, generating $121.5B in retail sales and other revenue (44.7% of total global licensing revenue), 2.7 percent higher than in 2016. The Corporate Trademarks property segment was again the 2nd largest segment at $55.8B (20.5 percent of the total), up 2.1% from the prior year. Fashion was the next largest licensed property type at $32.1B 11.8 percent of the total) share, 3.3 percent higher than a year earlier. 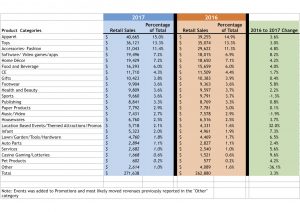 Apparel (15.0%), Toys (13.3%) and Fashion Accessories (11.4%) continue to account for the largest merchandise categories n the licensing business. Growth in 2017 was spread widely among many product categories.  Casino gaming/Lotteries also showed strong growth at 9.6%, as a greater number of licensors seek to expand into more non-traditional licensing categories as brick-and-mortar shelf space continues to be squeezed.  Home-related categories — Lawn/Garden/Hardware (up 6.7%), Home Décor (up 4.2%) and Housewares (up 3.7%) — showed growth higher than the overall 2017 average.  This growth was likely the byproduct of yet another really strong year in the worldwide housing market as evidenced by global property prices rising strongly at 4.6% in 2017, buoyed by average price increases in 85% of the 59 countries tracked by Knight Frank in its most recent Global House Price Index (March 2018) .  Meanwhile, Video Games/Software/Apps segment jumped  8.2%, in large part  on gains in the amount of in-app revenue that publishers have been able to generate via sales of virtual goods and “extras.” 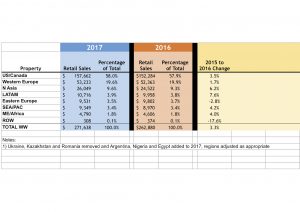 The global breakdown of sales of licensed goods by geographical region finds the strongest increases coming from North Asia (up 6.2%) and the LATAM (up 7.6%).  Growth in these regions was primarily driven by strong growth in China/Hong Kong, Japan and Brazil.    The share of the global business accounted for by U.S./Canada remained essentially flat (58% of the total).

Our inquiries about the share of the business being generated via eCommerce found respondents reporting the same results as a year earlier – an average of 79% via brick-and-mortar, 21% on-line. In the four years of this annual survey, this is the first one in which the needle hasn’t moved toward increased  share by eCommerce. It could be a reporting anomaly, since the comments section of the survey included several respondents noting that they’d seen an acceleration of a shift toward online sales.

As one agent noted in a general comment on the retail business, the strength of eCommerce is forcing shifts in the rest of retail. “As online retail purchases continue to increase, consumers are no longer satisfied with traditional retail experiences and seek to connect with brands and products in more immersive ways. This has forced retailers and brands to create ‘shareable’ experiences that not only allow consumers to explore the brand, ‘feel’ products and create buzz, but also help them become a part of the brand and its heritage.”

One thing is certain — it remains a transformational time in Retail. According to Deloitte’s 2018 Global Powers of Retailing Report, “ ‘Everywhere Commerce’ has taken root, allowing consumers to shop however, wherever, and whenever they want—whether in stores, online, by mobile, voice activation (device) or click-and-collect.”  Deloitte also found “that digital interactions influence 56 cents of every dollar spent in brick-and-mortar stores, up from 36 cents just three years prior.” Further,  another report from the same company found that “people who use different shopping methods — including online, mobile, and visits to physical stores — spend more than double those who only shop at brick-and-mortar retailers.”

We are often asked about the UK Licensing Market size specifically and we calculate it is worth around 10% of the global revenue figure. (Source: Licensingpages, with reference to LIMA and The Licensing Letter figures)

Overall the key indicator as to what is performing well is what is in retail. It would appear that retailers are concentrating on the brands that are tried and tested and will provide solid sales. These are being ‘topped up by promotional licenses, for instance around blockbuster movies. There is a considerable focus on celebrity, social media celebrities and animals, music and athlete endorsements. Retailers are more frequently launching their own brands or taking licenses directly (DTR=Direct to Retail). There is a shift to greater online sales.

There have been a considerable number of mergers and acquisitions in the industry and there is considerable consolidation. TLC has been absorbed in the CAA-CBG conglomerate. Dreamworks has been acquired by Universal. Disney own the Marvel, Jetix and Lucasfilm archives. Mattel own the HIT archives. DHX own CPLG.