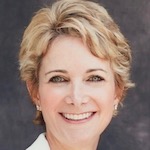 She joins from a short spell at her own consultancy but prior to that was VP Head of Global Licensing & Partnerships at Activision. Previously she was VP of Licensing at Sony Pictures Consumer Products and Director of Licensing at Fox / Saban.