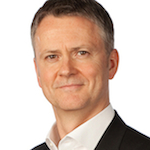 Steve Macallister joins Zodiak Rights as CEO. He joins from BBC Worldwide where he was President and MD of the sales and distribution division.