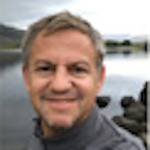 He joins from Rubie’s Masquerade  where he had been for over 6 year most recently as UK Commercial Director. Prior to that he was Licensing Director at Hallmark. He has also had spells at Corgi, Warner Bros. Disney and Hasbro.